My second day in Nice was spectacular! But it was also filled with some ridiculousness. So we’ll start with that first.

I went down to the hotel restaurant to have breakfast – a nice buffet was included with my room rate. So I’m perusing the offerings, hot beans and ratatouille, a charcuterie plate, cheese plate, lots of breads and pastries, fruit, and then scrambled eggs… but there was also a sign about soft boiled eggs so I thought oh, that sounds good. But when I opened the hot water bath there were no eggs in it, just empty baskets. Hmm. Well here’s a bowl of hard boiled eggs, I’ll just grab one of those.

So I’m settled at my table with my breakfast selections and I’m like “how am I going to crack this egg without making a racket?” So I tap it with my fork. It oozes a little bit. I’m thinking oh gosh, this egg is not set very well. I tap it gently again. I realize that these were not hard boiled eggs, these were raw eggs that you are meant to soft boil yourself. So I set the egg to the side of the plate, laughing at myself, and keep eating. Well the white starts to slowly ooze out onto my ham. So I’m scooting my last bit of pain au chocolat and my piece of manchego over to the opposite edge of the tiny plate to try and save them from being overcome by raw egg which will subsequently give me salmonella if I accidentally eat any of it. I had to sacrifice the ham but I managed to consume the other two items. I was so embarrassed, I was hoping the server would not come by and try to take the plate while I was still sitting there. He didn’t. I slipped out before anyone else know what happened.

I had gone out onto my terrace to write the previous blog post. To access the terrace there are two large glass doors which swing open to the inside and then you have to step over a ledge that is about a foot high and then out onto the terrace. So it’s basically like climbing out a giant window. I had my iPad and phone in hand and I was climbing back through the window but the outside ledge was slightly slanted downward and made of some sort of slick stone. I’m not exactly sure how it happened (I tried to reenact what might have gone down) but my right foot was inside and my left foot slipped down the ledge and as I fell backward I caught the inside of my right calf on the sill which has some metal runners on it. The full extent of the damage has yet to surface but I have a swollen bruise the length of my thumb and twice as wide.

I went to the beach for the day. The Brazilian gal I had met in France had warned me that the beaches are very rocky, which they are. Large smooth rocks on your way to the water and then pebbles once you’re in the water, but still uncomfortable on your feet. She had mentioned buying water shoes but I thought I don’t want to spend money on those, I’ll just wear my flip flops. Which you know, are completely dependable when wet. So I walk into the water a bit, like barely ankle deep. The waves were insane and the undertow was super strong. I could barely stand and my foot started to slide off my flip flop and then the water pulled it right off. I turned to try to grab it but then another wave came. It looked like it was washing to shore so I turned to get it when the other one also fell off. So now I’m standing there in the ankle deep water, trying to walk to the shore with all these rocks underfoot and the waves trying to suck me back out. But I’m happy to report that both flip flops were returned safely to shore by the tide. So I thought ok, I’ll just hold them and go in barefoot. Other people are going in barefoot, I can do this. No. I couldn’t do it. The rocks felt so awful! So sunbathing was my destiny for the day. Which I was ok with.

Ok now let’s get to the good stuff.

I spent most of my day at the beach!!! I had rented a beach chair and umbrella which were totally worth it. Without the umbrella I think I could have only survived two hours in the sun, but with a needed break from the sun I was able to spend my day lounging.

It was like a nice resort. There was chair service with cocktails and food. I had my first Aperol spritz. I also had my second. I think they’re one of my new favorite cocktails! I also ordered an amazing plate of food – whipped goat cheese layered with roasted peppers, served with roasted tomatoes, salad and focaccia breadsticks. A perfect seaside lunch.

I relaxed and read my book and just enjoyed the atmosphere. I had spent so much time walking and sightseeing the previous days, I needed this!

After the beach I went back to my room to shower and get ready for the evening. I had settled on Bar des Oiseaux for dinner so I walked over (it was only about 7 minutes from hotel). It was off one of the main Rues, down an alley. This place was so cute! I sat outside but the inside was also very charming. They bring the menu around on a chalkboard as it changes all the time. I had the most amazing meal I’ve had on my trip so far! Roast mushrooms and pancetta over gnocchi. Asparagus over tiny cheese ravioli with a poached egg and hollandaise. And for dessert, clafoutis cerise (cherry cake). Plus rosé (two glasses. I mean, it’s not like I had to drive anywhere!) I was stuffed and so happy! 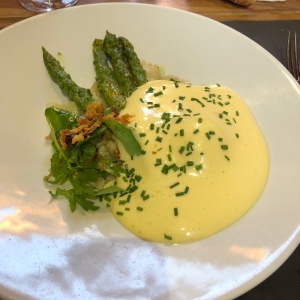 After dinner I walked over to the Jazz Festival. This was the 70th anniversary of the festival! There are several acts every night. The first act I saw was a group called R+R=Now. Their style was really cool and the music was great. But the headliner was Jack Johnson! I’ve always loved his music so it was a special treat to be able to see him live, which I never have.

It was all standing room and people were packed together like sardines. I’m not big on crowds so I had to deal with my share of annoyances, like the lady behind me who was wearing her giant bag on her front and swaying and hitting me in the behind with her bag. I mean, how do you not feel that you are hitting me lady? The real highlight was this drunk girl and her boyfriend who had pushed their way up to where I was standing, and he was dancing so wildly I got elbowed a few times. But then the girl next to me confronted the drunk girl and I thought they might fight!! They didn’t.

The concert was so great! He played for over 90 minutes. Some things I hadn’t heard before but all the favorites – my personal fave is Banana Pancakes. He played and his pianist played the accordion to give it that “French” feeling.

The coolest part of the night though was that I was standing there with thousands of other people from all over the world, speaking dozens of languages. But when he played his first song and everyone sang along (in English) it was truly beautiful. You hear it said that music is a universal language, but in this instance it really was true. Suddenly the differences among us faded and we were all connected through the songs that we all enjoy and appreciate. What a perfect last night it was!

So today I bid farewell to Nice and I am on the train to Italy! First stop, Riomaggiore and the other 4 towns that make up Cinque Terre. The instructions to get to my hotel are hilarious. I’ll tell you more about it in my next post!