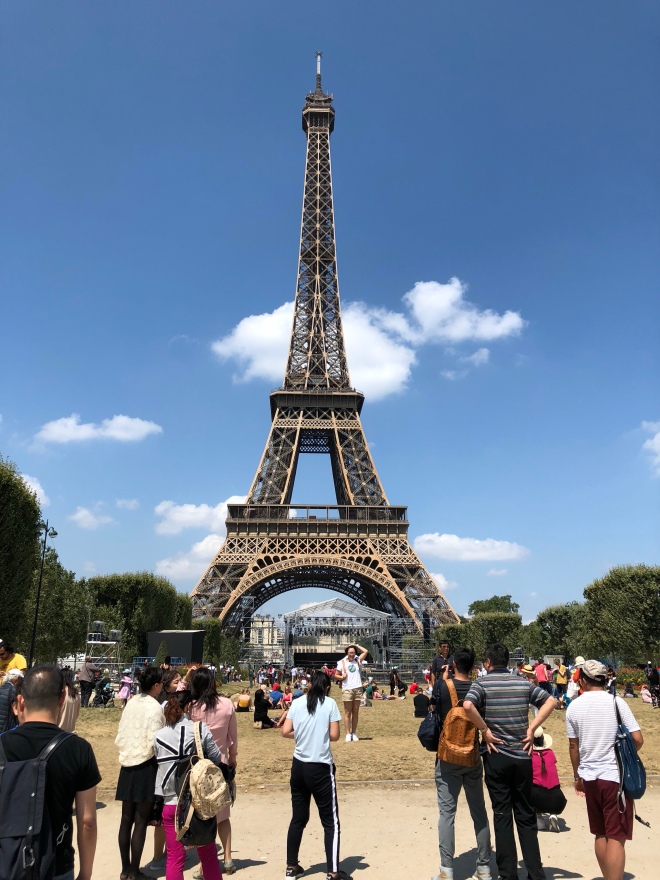 My first day in Paris was a bit daunting! I suppose the jet lag didn’t help. I had no issues navigating my way from the airport onto my train and then to the hotel. But the city itself is a bit hard to navigate! Also I’m discovering that perhaps I should have made a better plan for how I wanted to spend my days here. I came in only having done a small bit of research and now find myself overwhelmed by all the city has to offer.

Day 1 – Getting my Bearings

I dropped my bags at my hotel (my room was not ready yet) and wandered a bit as I made my way to the Eiffel Tower. It was pretty amazing to see it for the first time! After that I made my way back to my hotel but first stopped off for a jambon beurre which has been on my food bucket list.

I stopped in a park to enjoy my sandwich and then walked back to the hotel. My room was ready so I settled in and set my alarm for two hours. I slept for 3. After a quick refresh I made my way to Les Antiqueres, a small bistro recommended by a friend who had visited Paris before. It was completely packed and the menu offered relatively classic French fare. I chose the steak frites with bearnaise sauce and a glass of Bordeaux. It was all perfect. After dinner I decided to walk for a bit and I ended up at the Jardin Tulleries which faces the Louvre pyramid (which is the museum entrance). It was really fun to just walk around and soak it all in. There were people everywhere – camped out on the lawns, walking around, playing a random game of bocce on the wide dirt path. I was starting to feel more comfortable with my new surroundings. 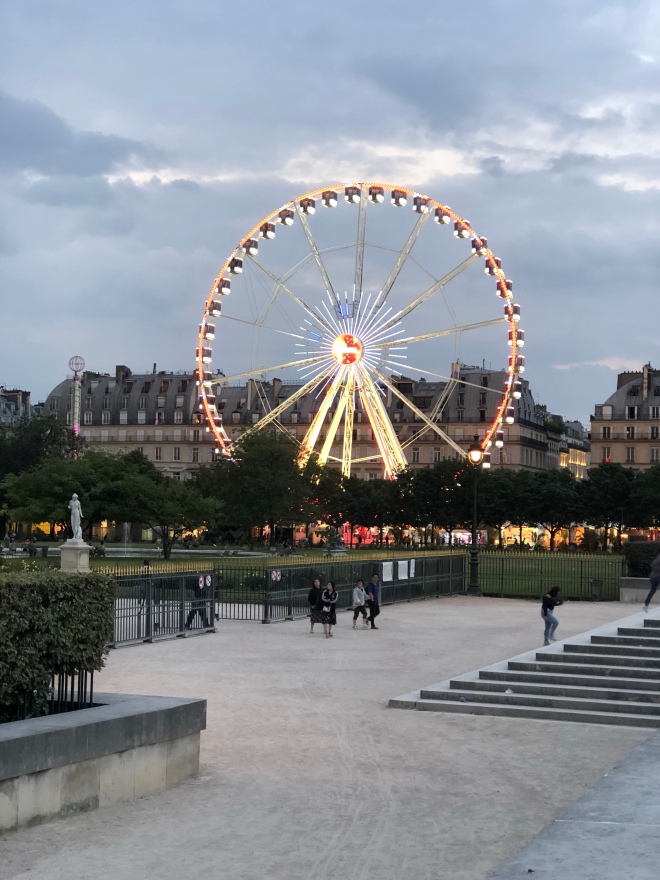 I set a plan for my day – well, at least I decided that I would start in the Latin Quarter and go from there. I had slept for quite awhile so didn’t get out until around noon. First things first – I needed coffee! So I stopped at a little bistro and sat outside and had a croque madame and a cafe creme which is coffee with milk. Then it was off to the Luxembourg gardens a few blocks away. They were breathtaking! At one edge is the Luxembourg palace, and then directly across were these giant hedgerows – bigger than anything I’d ever seen. I felt like I was Alice in Wonderland.

In the middle was a fountain and there were tiny sailboats floating around. Again, there were people everywhere. Some exploring, some just sitting in the shade talking or relaxing. The gardens have over 100 different statues of historical figures so that was a pretty cool feature too!

After that – my map showed me that I was pretty close to the shop of Pierre Herme, renowned pastry chef, so that’s where I headed! On the way I took in the sights including a beautiful old church with an enormous fountain in front of it.

But Pierre Herme! The shop was small and super swanky. While there were a lot of fancy pastries I went straight for the macarons and selected the most interesting flavors: chocolate with passion fruit; apricot and saffron; passion fruit, raspberry and rhubarb. So that was on more thing checked off my list of must-dos.

I trekked on, and now that I’m looking at the map of everywhere I walked on Day 2 it’s no wonder that my feet hurt as much as they do! Did you know that Paris has 2 islands? I didn’t either. Notre Dame is actually on an island in the middle of the Seine, and next to that island is another called Ile St. Louis. That was my next destination, in search of what my research told me would be the best ice cream in Paris. On the way I walked past Notre Dame – it is truly spectacular and beautiful. I could see some of the gargoyles on the top – the architectural detail was amazing. Equally amazing was the line of people waiting to get inside! What you never see though is the side of Notre Dame, so as I continued down the street I got a whole different view of this famous cathedral. 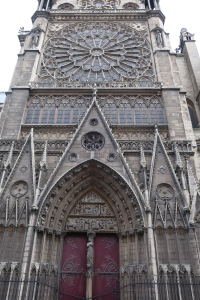 I got to Berthillion, the ice cream shop – I knew I was there by the line down the sidewalk. I only had to wait about 15 minutes which really did not give me enough time to make up my mind, but I went with a scoop of passion fruit and a scoop of pineapple basil. They call it ice cream but it was similar to gelato and OMG was it good. Kind of tart, like they didn’t add too much sugar. It tasted like they’d whipped up frozen fruit and put it in a cone.

So! At that point I realized I would probably need something real for lunch and I was very close the Marais, the old Jewish district now also the LGBT district. I headed that way and stopped by the Place de Vosges, a small park in the district that was on Culture Trip’s list of things to see. It was not a must see but still nice to have a place to stop for a bit. The options for shopping in the Marais district are plentiful, and July is apparently when every single store is having a sale. But I was on a mission – the Brezih Cafe for their famous buckwheat crepes.

I got a table and perused the menu. I selected a buckwheat crepe with ham and Comte cheese and a cider. Did I want sweet or dry? They have 3 kinds on tap and the server recommended the dry. They serve the cider in a sort of small  ceramic bowl or mug without a handle. It was definitely more funky than the cider we get in the states. The initial taste was apple-y and good, but the aftertaste was very yeasty and fermented. I enjoyed it but I’m not sure I would order that again. That crepe though. I could eat those any day. The cheese was so melty and smooth, and the crepe was just a little crispy on the edges. It was exactly the perfection I was hoping for. 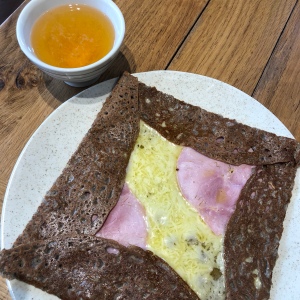 Afterward I made an emergency trip back to my hotel because my phone battery as only at 30% and I had forgotten my travel charger (what an amateur). The irony is that my dinner spot for that night took me back the exact same route on the same train. But at the same time it was nice to relax in the AC for a bit.

Dinner was at Restaurant 52 – a recommendation from my cousin’s friend who is from Paris. It had a super fun atmosphere – the decor was very simple – there really wasn’t any, and they were playing oldies from the 50s-70s. A lot of the restaurants have French and English menus, so while there was a French menu on the table the host still brought me an English menu. I was grateful, as this was a very innovative “foodie” restaurant and I would have never been able to select my food from the French descriptions. My server came over and before just ordering in English I asked if she spoke it. She said yes, and after a brief chat she encouraged me to practice my French. So I ordered everything in French including my “verre de rose” and tap water although now I can’t remember the word for tap as opposed to sparkling. She told me for dessert she was only going to bring me the French menu. The meal was fantastic. Heirloom tomatoes with burrata, green gazpacho and oregano ice cream to start. Then for the entree, pan seared mackerel (which was salty and fishy but so good) with roasted vegetables on a broccoli cream, with a side of stringy fried potatoes. It was dreamy. Then the dessert! A rolled cake with vanilla cream, yuzu gel, grapefruit and orange sorbet. I’m running out of descriptors for how good this dinner was!!! I loved every bite.

I was walking to the metro station after dinner and just soaking it all in. The street I was in reminded me a lot New York except much more social! I observed Parisians hanging out in front of shops, sitting at restaurants, all socializing. I think I’m usually the only one with my phone out since I’ve been relying heavily on google maps. There was graffiti up and down both sides of the streets on the garage doors of the businesses that were closed.  This was a neighborhood unlike any others I had visited so far. The vibe was super cool.