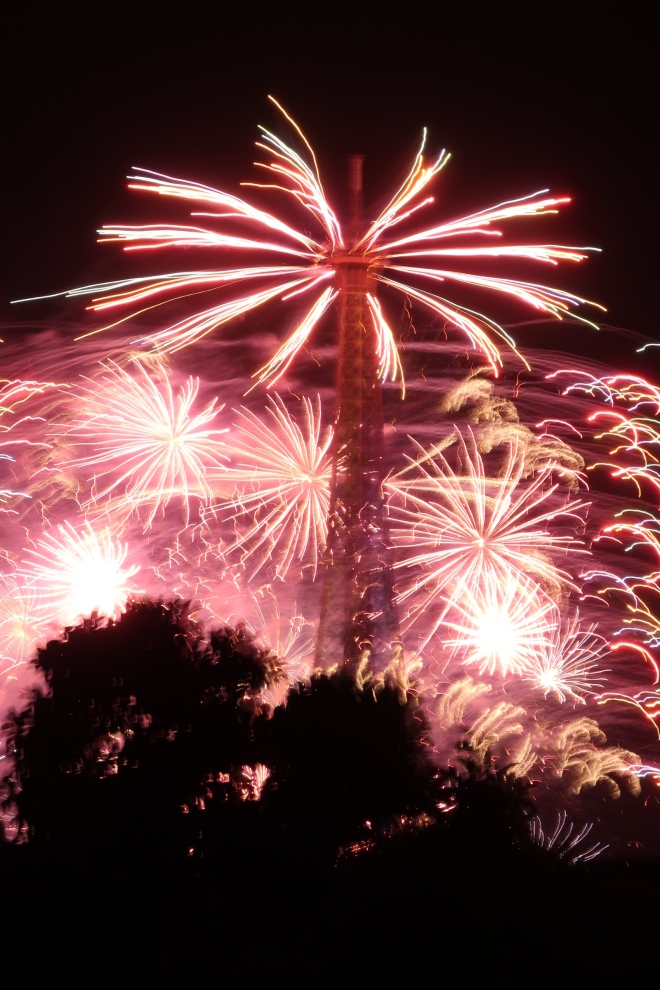 As I write this I am camped out near the foot of the Eiffel Tower with about a million other people listening to the Paris symphony perform while we wait for the big fireworks display to commemorate Bastille Day (which they call the Fête Nationale). It’s the moment I’ve awaited with the greatest anticipation this entire trip.

My main goal today was simple: go to the Louvre. On July 14 (Bastille Day) they offer free admission so I figured it would be the perfect opportunity to cross it off the list. As did the 300 other people who were already in line when I arrived at 8:45. On foot. Because my bus decided to terminate the route half way there. My bus driver tried to assure is it wasn’t his fault. No matter whose fault, I still had to walk 20 additional minutes to get there.

So the museum opened at 9 and I was in by 9:20. I read somewhere that even if you only looked at each piece of art for 30 seconds it would take you 100 days to see everything. So I took a different approach: I took the recently curated tour that highlights all of the pieces featured in Jay and Bey’s Apes**t video. It really was the perfect approach – I saw everything I would have wanted to and then some. I had no idea that the Venus de Milo was at the Louvre!!

Afterward I was headed to the St. Martin canal when a giagantic beautiful building caught my eye. So I walked toward it. It was the Opera house! Paris is so interesting in that you’ll be walking along and come upon some sort of amazing architectural beauty without even trying. This has happened to me every day.

I stopped to snap a photo and then realized I was very close to the Fragonard perfume museum which a friend had told me about. Having no agenda I thought I’d check it out! The 30 minute tour is free and I learned all about the history of perfume, how they extract the fragrance and also a history of the bottling and labeling. At the end we did a perfume smelling (there must be a fancier word for this) and I decided that some perfume would make a great souvenir.

So I made my way to the Canal St Martin which was a really interesting neighborhood. My cousin’s friend (the same one who recommended last night’s restaurant) had recommended a restaurant in the area so I thought  would check it out. After I finally found it (he warmed it would be hard to find!) I found myself at first walking down a hallway with red peeling wallpaper and a tiger hide mounted on the wall. As I walked into the main room I found myself in a sort of Atrium with patio furniture and a skylight. I was apparently in an African tiki bar. An old map of Africa, as tall from floor to ceiling, hung on the wall. They were playing tropical/tribal music. I ordered a drink with vodka, cucumber, passion fruit and a special African juice made from hibiscus flowers and mint. It was soooooo good!!! I also ate a croque monsieur sandwich which is basically a toasted ham and goat cheese sandwich. Except that what the menu doesn’t tell you is that there’s a giant clump of some sort of Brie-like cheese melted over the top. Now I typically don’t like Brie, but this was actually really good! Also now that I’m thinking about it the menu said my sandwich came with frites and vegetables. Which I did not get.

So my plan after that was to head to his giant gourmet grocery store where I thought I would pick up a few things to picnic with tonight. However, I took a wrong turn (which I did about 5 times today) and ended up in this super busy area which I know is one of the big shopping districts, Les Halles. I got distracted by some street performers who were blasting the theme song from Amèlie, one of my favorite movies and as I walked along the cobblestone streets I came across a second street performer with a puppet who was playing a fake accordion. But the music was oh so very French! It was truly a special moment. I strolled through the shopping area a bit but I was too tired and hot to even consider trying on clothes, so I hopped the train to the Epicerie.

This place was enormous! Imagine a French Dean and Deluca on steroids. They had all of the foods you could imagine. A huge cheese section. A bakery. A butcher counter. Plus potted meats and terrines. An entire case devoted just to butter. A lovely produce section with fruits I’ve never seen in a grocery store. Shelves upon shelves of spreads, crackers, pastas, chocolates! A whole section just for chocolate bars. I walked out empty handed, realizing I was again too hot and tired to make any decisions. I would regret this later.

So I went back to my room to nap and cool off. I determined after my nap that I didn’t really have time to grab dinner so I would picnic in the park with everyone else. I pulled together the best picnic I could on short notice (thus my regret in not shopping earlier). Our concierge sent me out the door with a corkscrew and a wine glass. I grabbed some ham and ementhaler and figs and a bottle of rosé from a local shop. But they were out of baguettes! I felt so insufficient. I took my chances by walking up one more block before cutting over toward the the Champs de Mars and it payed off! I got a baguette and a raisin pastry and followed the crowd over.

Because this is such a big event they had security outside the park entrance. They looked in my bag and told me no bottles! Which meant I would have to abandon my rosé. They said unless I poured it into plastic. I had grabbed a plastic cup from my room before I left so I popped the bottle open, took a giant swig, then filled my cup to the brim. Then I took another swig and one final drink before I threw it into the trash.

I was definitely late to the party but found a spot in a small lawn area to left of the Champ de Mars. Everyone was picnicking and chatting and enjoying the music from the symphony, which was excellent. Then right on time, around 11pm they lit the Eiffel Tower with red blue and white lights and sang Le Marseillaise, the national anthem. Finally my French studies paid off! I sang along just as I’d learned my sophomore year of high school.

And then the fireworks! It was the most magnificent display I’ve ever seen. The theme for the display this year was love, so there was a mix of American and French songs throughout with a well-choreographed fireworks display for each song. I cannot describe the emotion I experienced as I enjoyed one of my favorite things (fireworks) in one of my new favorite places. If you think about something that makes you really happy and then multiply it by a million, I think you might be able to understand my feeling of bliss and utmost happiness.