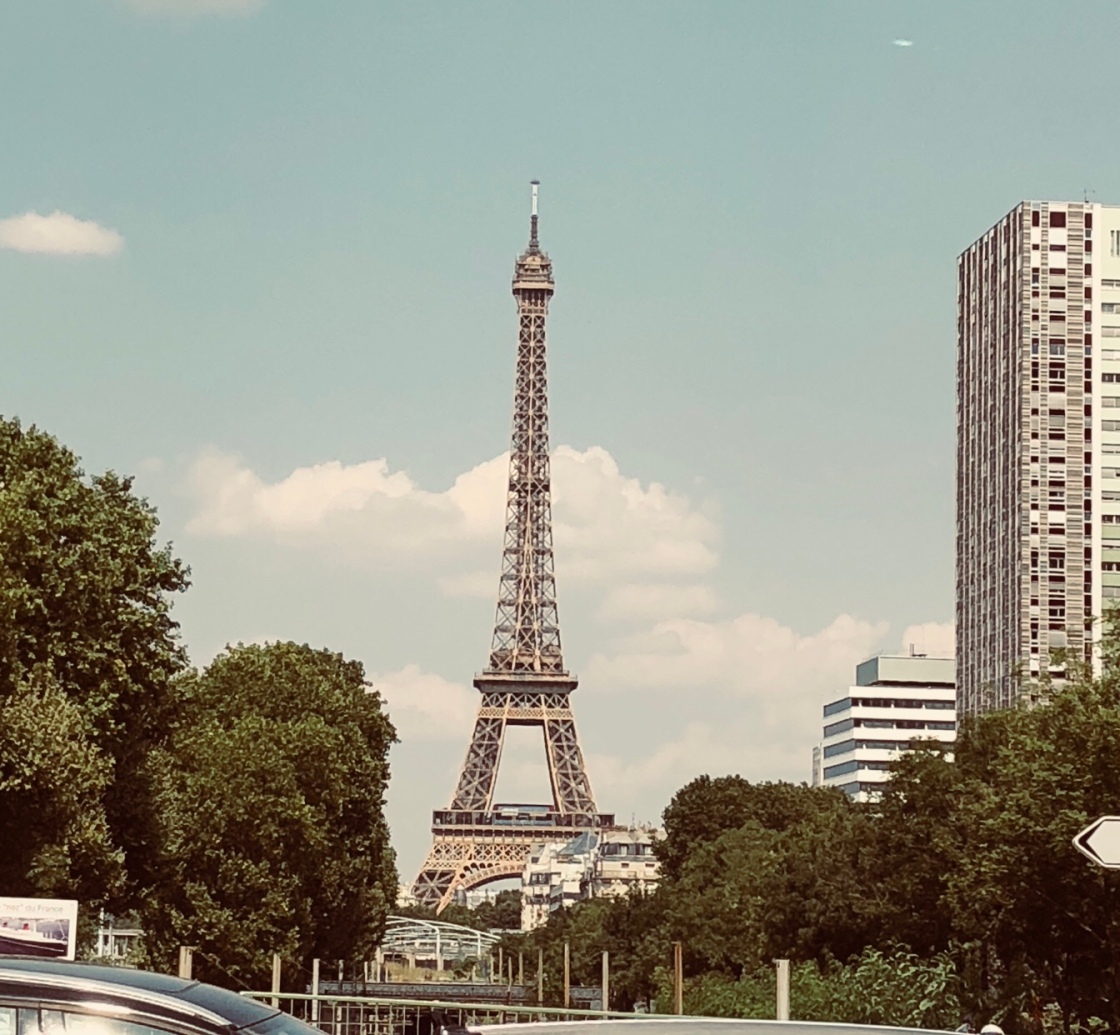 First things first – France won the World Cup! The city came alive yesterday in a way that was indescribable. Imagine if your city won the Super Bowl or the World Series and then multiply that by a million.

My initial plan was to head over to the Champs Elysses for the day because it was the only quintessential area in Paris that I had not yet been to. I planned my route – I would take the metro – and I was looking forward to a nice stroll and some window shopping and lunch. Well. That didn’t happen.

I got to the Metro station and it was closed. So I thought maybe I’d walk up to the next one. But suddenly there were people EVERYWHERE. And as I proceeded to the Main Street I planned to walk down there were hundreds of people congregated at what I think may have been one of the checkpoints to enter the Champ de Mars for the huge watch party in front of the Eiffel Tower. As I looked down the street people were flooding to the area, many of them running down the street! It was only 1:30p and the game didn’t start until 5. I couldn’t believe what I was seeing. It was civilized madness.

People continued to pour into the area. I stood and watched. Then I heard a guy next to me speaking English so I asked if he knew what was going on. He was from Amsterdam and said he didn’t know. We chatted for a bit and I also met his fiancée who was from Brazil. I’m still not sure how they met but found this international pairing to be rather fascinating. They were on a family trip with her family and invited me into their group photo. Then we all walked for a bit down a less crowded street while crafting our plans. I decided to walk over to a shopping mall to check it out so we parted ways and off I went.

The mall was interesting. It was 3 floors plus an underground floor. There were many chains we have in the US – Sephora, H&M, Zara, but also several boutiques with prices I couldn’t afford, even with sales going on. Still it was fun to walk around but even though a mall is one of the places that claims to have air conditioning, they really don’t. I walked into Esprit and thought they had turned the heat on.

So then I thought I would walk along the Seine and hopefully find some lunch. But this section of the Seine was more business/industrial so there was nothing really, except the Statue of Liberty.

I thought I would head back toward my hotel and see if I could find food along the way. Everyone else was bustling about, wrapped in French flags or wearing team apparel, heading to their watch parties. Entire streets were closed off to contain the masses and prevent vehicles from getting too close to pedestrians. I just wanted some lunch. I finally came upon a restaurant that wasn’t super packed, but when I got there I was informed that their kitchen had closed. So I popped into the next boulangerie I came across and bought a baguette. Now at least I had an entire arm’s length of delicious, warm bread to sustain me.

I ended up back at the grocer I had gone to the night before and stood in line for about 10 minutes waiting to buy some cheese and a bottle of rosé. (A do-over from the night before). I was set.

As I headed back to my hotel it was fascinating to watch all of the crowds gathered. Cafés put up metal fencing around their patios to keep customers contained. All the streets in the area were closed so everyone was walking around wherever they wanted.

I watched the game from my room. I was hot and tired and not wanting to get swept up in the craziness that I knew would ensue if France won. Which of course they did. I went outside to check out the celebrations but in the neighborhood I was in it was not as wild as I would have expected. Nonetheless the random chanting, cheering, whistle and horn blowing would continue well into the night.

But now – the title of this post. Today I’m flying to Nice for the next leg of my adventure. I didn’t sleep well because I never really sleep well the night before my flight. I had mostly packed last night but repacking this morning was tough. I got everything into my suitcase plus a carryon tote and my purse. I took the metro to the Orlybus, a bus specifically routed to Orly airport. I don’t even know why I bothered putting on a jacket, I was already sweating after lugging my carryon up two sets of stairs to the train platform.

So I get from the train to the bus no problem. I purchased a bus ticket and found a spot for my suitcase and myself. I knew which terminal I needed to get off at. But then things got stupid.

So when you get inside the terminal there are monitors that tell you which hall to go to for check in – there are 4 of them. I found my hall but then couldn’t figure out where to check my bag. Nor could the sweet Italian lady who asked me for help. I was of no use to her. Finally there came a multilingual airport employee to the rescue. He walked me to where I needed to be. I was going to check my bag (because I thought I had too many items) but the airline staff told me I could carry everything on. Ok! But I hadn’t researched the carry on requirements to know the restrictions are the same as in the US, except you don’t have to take off your shoes. So I open my suitcase and pull out my liquids. They’re in an odd shaped case with the same capacity as a quart zip lock but they didn’t believe me so they handed me a zip bag and told me to put my liquids in it. They barely fit and the bag wouldn’t close. They said it was ok. Then I had to take out my tablet. So I had like 4 bins of stuff and then they wanted my boarding pass. Which was in my purse in a bin. Meanwhile I’m holding up the entire security line as I fumble about like a first timer. Also, you don’t wait for your stuff to go through the X-ray like in the states, so they guy is saying “allez!” as I’m waiting by my stuff.

So I clear security and I’m literally dripping sweat. I found a place where I could recombobulate and then I grabbed some breakfast and found a place to sit. Phew!

They never really made a boarding announcement so I just watched as people started to line up. I boarded the plane and stowed all my bags no problem. So now, I’m off to Nice and to the beach. More to come!